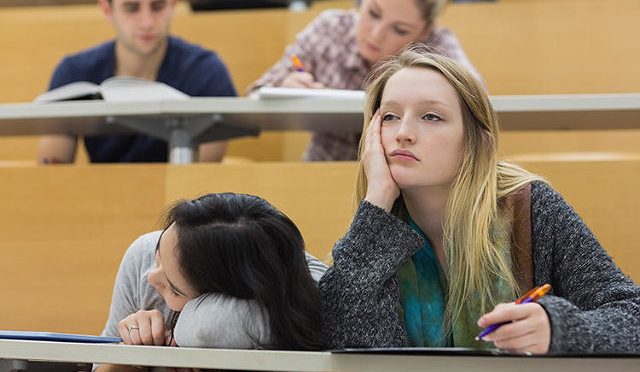 Teenagers learn differently than kids and adults. Their learning process is being influenced by various factors. They learn very fast (foreign languages, skiing etc.) because their brain develops fast if it is being used actively. On the other hand, teenagers are said to be really problematic because of their behaviour. The following things are problematic: lack of motivation, lack of discipline and attention deficit. They get easily bored, distracted, tired and don’t feel comfortable with speaking in front of the class. Their behaviour has its scientific explanation: teenagers are going through a phase of adolescence which means that they stop being a dependent child and evolve to an independent adult. This phase starts in their 10th or 12 th year and continues at least until they turn 20. During this period they have to manage challenges of the physical, mental and social evolvement which affects their learning habits. Put it simply: they just look like adults, however, they are still kids.

MOTIVATION.
Teenagers become critical. They do not show interest for everything what they learn in school. They find their personal fields of interest and change their focus of interest. In addition, they body starts to change. They like school only because of their class mates and not because of the things that they are being taught in school. If
you want to awaken their interest, leave them more freedom to choose and take responsibility. For example, they could choose if they are going to write about Berlin or Köln, whether they will work alone or in pairs. Also, choose materials about danger, love, future, music anything that addresses their emotions.

OVERREACTING.
Teenagers can literally explode if you tell them to behave or if they get a bad grade from you. Other people would feel bad in situations like that, however, they wouldn’t overreact. Why is that so? The teenage brain processes information about emotions in a different way than by adults. The part of their brain which controls emotions is not well developed yet, while the part where anger and fear emerge already functions well. This is why they sometimes overreact and ignore advices or warnings from their teachers and parents. Adults need to show more patience and tolerance, explain their teenagers how they should deal with fear, anger and disappointment as long as they do not disturb other students. Sometimes you just need to explain them the consequences of their behaviour.

CLASSMATES MORE IMPORTANT THAN THE TEACHER.
Making friends and being in contact with other kids of the same age is most important for teenagers. They want to feel socially accepted. They ask themselves if they are popular enough and how other kids of their age see them. That is why teachers and even parents loose their importance. This affects even their grades. They want to get good grades because they don’t wish to look stupid, however not too good grades because they don’t wish to stand out. They don’t want to look like nerds and even if they get god grades they pretend as if they did nothing much to achieve that success. This means that you as a teacher should have your students work more often in pairs and groups.

BOREDOM.
Researches have proved that one third of students aged 12 -16 years feel boredom during the classes. This doesn’t mean that the students don’t have what to do in the classes. This is related to the fact that often the relevance of the learning material is unclear. Students often feel that they learn something that they are never going to need later in life. When they are bored, students think about some other things, talk to their class mates, do homework for other classes and eventually get bed grades. That is why is so
important that you teach students something that they could find relevant and interesting, something which concerns their world.

ATTENTION DEFICIT.
Teenagers are unable to concentrate for long. They get easily distracted during the class or when they learn. An important part in this plays their brain. Like any other part of the young teenager body, their brain develops slowly and its evolvement lasts many years. The part of the brain which is responsible for concentration develops completely only in the end of the adolescence phase. Experimental researches have proved that teenagers cannot concentrate for a longer period of time or exclude irrelevant things which distract them from learning or doing any other activity which includes long concentration. You as a teacher can overcome this by  changing the social forms in the class dynamically – the students should work individually, then in pairs, in groups or all together. You should divide the time in classes in well organized parts and give the students clear instructions. Also, students concentrate better if you work with photos, videos and other visual materials.

TIREDNESS.
Many researches prove that more than a half of students feel tired in the morning classes. This applies more to boys than to girls and increases during the phase of adolesence. This occurs because the students sleep less – they go to bed later than when they were kids, although they need more sleep than before because of their physical
transformation. They go late to sleep because they start to do their homework late, cannot leave the Internet or just wish to behave as adults. However, the changes in their hormones is the main cause of this behaviour. Melatonin which helps control the sleep and wake cycles is actively produced by teenagers only late in the night which is why they go later to bed. This is why early morning classes are not the best solution for teenagers. In order for you as a teacher to overcome this situation, you could start your classes with music,
physical movement or have the students work in pairs/groups. Avoid grammar and difficult topics early in the morning.

Stories of a white board