Probably you already know that you could use colors when writing the German nouns in your vocabulary book: you could for example write  masculine nouns in blue, feminine nouns in red and neuter nouns in yellow or green. That would be one way for memorizing noun Gender in German.

There are many other ways for that!

These tips and tricks could be very helpful here:

YOU DON’T HAVE TO LEARN THEM ALL!

You could imagine masculine nouns (objects) with a hat on them, feminine nouns with braids and neuter nouns with diapers.  Also, a lion could be a signal for masculine nouns – if you need to memorize a new masculine noun, just imagine one lion who is trying to swallow that particular item. You get the picture. Feel free to come up with any other similar system.

You could put the nouns with the same gender in some mutual connection or context and create images in your mind. Here is an example: I memorized a hill, a tree, a monkey and an apple all together. Since they are all masculine (der Berg, der Baum, der Apfel, der Affe), I imagined: the tree was on the top of the hill, a monkey sat on the tree and the apple was there too. This helped me remember their gender easier. Drawing on a piece of paper can help here too.

Children love using colorful threads. They write words on little pieces of paper and hang them to the appropriate thread: red for feminine, blue for masculine and yellow/green for neuter. The threads can be fixed to some wall or board and new words can be added to them at any time.

Maybe you didn’t know that Thomas Gerstner has written 3 books where he used only nouns with the masculine, feminine and neuter nouns. Very clever, isn’t it? You can order the books here: 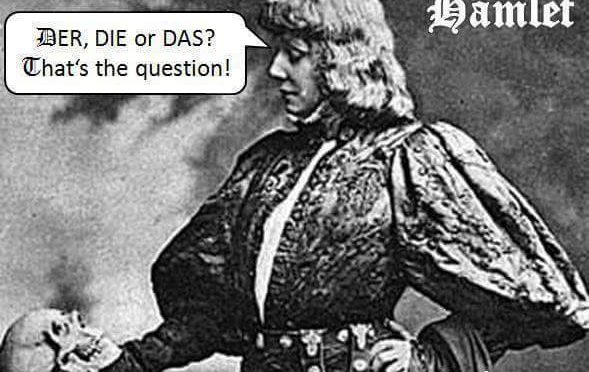 These suffixes can help you recognize noun gender in German:

Would you like to practice more of grammar online?

+nouns which are generated from infinitive by writing the first letter in upper case are also neuter: for example: das Lesen, das Essen, das Versprechen

+nouns that are generated from adjectives too: for example: das Gute, das Schöne.

Tips and tricks: HOW to memorize the noun gender better

Sources: Deutsche Welle; Grammatik sehen, Arbeitsbuch für Deutsch als Fremdsprache, Hueber; my ideas and ideas of people who were so kind to share there experiences.