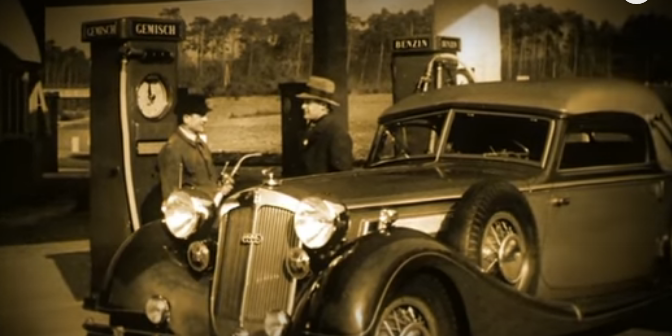 Watch the video or read the translation in English below.

The story about Audi starts with August Horch who created Audi as a brand. He was one of the most important pioneers in the field of auto motive industry. His sports cars and limousines were the most luxurious vehicles of his time.

The oldest Horch-car in the Horch museum in Zwickau was built in 1911. About 10 years earlier people were still driving coaches.
This can be seen by the steering wheel which is placed on the right side of the Horch car (like in coaches).

The oldest Audi in this museum is the so called Type B which was built in 1911. That is the car with which August Horch made the famous Alps-tour. It was the most difficult mountain route back then and can be compared with today’s most famous fast car rallys. August won the Alps-race with the type B three times in a row and managed to established the Audi reputation in the motor sports only 2 years after he founded his firm. 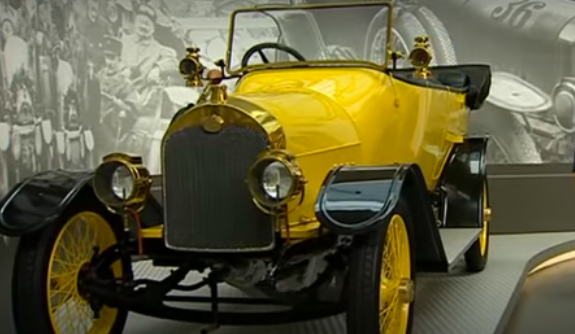 1909 Horch left the Horch firma and founded his own firm. He needed to think of a good name for his new firm. Luckily the son of his good friend and financier was a good student and he suggested Audi because the last name Horch is the imperative of horchen which means hören, lauschen and in the Latin it means the same as Audi.

At the begin on the 20. century, producing cars meant hard hand work and using heavy machines. Only a couple of hundreds of vehicles were built in a year. August Horch was an inventor and he wanted only the best quality and focused on innovation. Since 1927 his limousines ran on 8 and 12 cylinder motors and he hired artists who were responsible for the looks of his cars. Those were the most luxurious cars of that time. Their price was between 150 000 and 200 000 euro. In the 30’s Horch moved the steering wheel from the right to the left side started using oil-filters.

The economic crisis in the late 30’s made 4 car producers build an Auto union. Otherwise they wouldn’t survive on the market. It turned out that it was a very good move. However, its end came with the end of the World War 2.

Teaching older teenagers in a state school – teaching as a challenge